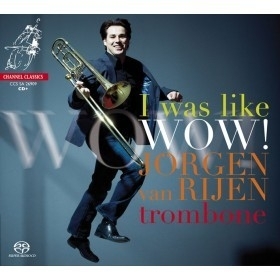 Jacob TV based his piece 'I was like wow' on a TV interview with American soldiers about their violent experiences during the Iraq war. One of them says: when I realized that I just got blew up by about 20 mines, I was like Wow.

This showed me that words and exclamations like 'wow' are used to indicate that something has made a deep impression, regardless of whether that impression is positive or negative; you can be impressed by something in all kinds of different ways. That's what gave me the idea of finding pieces for a new cd to combine with this impressive piece 'I was like wow'  that impressed me deeply for all different kinds of reasons, pieces that for some reason had given me a 'wow' feeling.

That resulted in this cd with music by Mozart, Honegger, Martin, Padding, Jongen, Castérède and JacobTV. It comes complete with the movie 'I was like wow' by Jan Willem Looze.